This and That Crochet 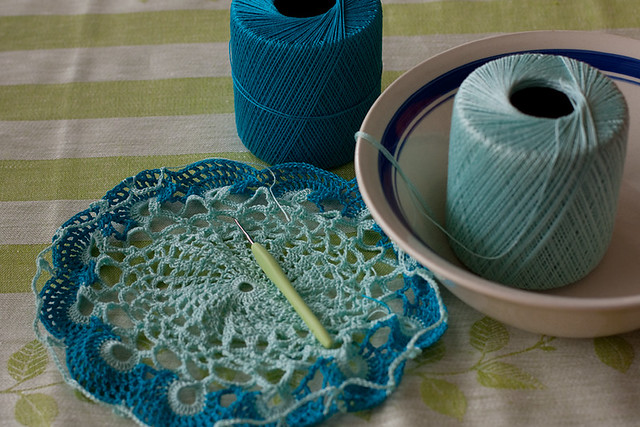 Should I admit that I've already made a mistake?  There are some rounds with long chains and lots of single crochet into those chains, and though I went to the trouble of counting and marking up my chart, I referred to the wrong number on one round, which made it impossible to work part of the next round into the very center of those many single crochets (because there was no exact center).  Eh, it'll be fine.

A long while ago, I sorted through my stash of yarn and pulled out all the Caron Simply Soft and similar yarns.  (I've decided not to buy more of it, because I don't love it, and Simply Soft's skinny version of so-called worsted weight doesn't work well-- imho-- with other, chubbier worsted weight yarns.)

A lot of it seemed to fall together into a decent color scheme (or so I tell myself).  There are blues-- white-- grey-- and a little green/blue-green.  I thought they'd make a nice afghan.  I was envisioning a tiled effect of single-color motifs-- probably hexagons-- and Ravelry's pattern search came up with just the thing: 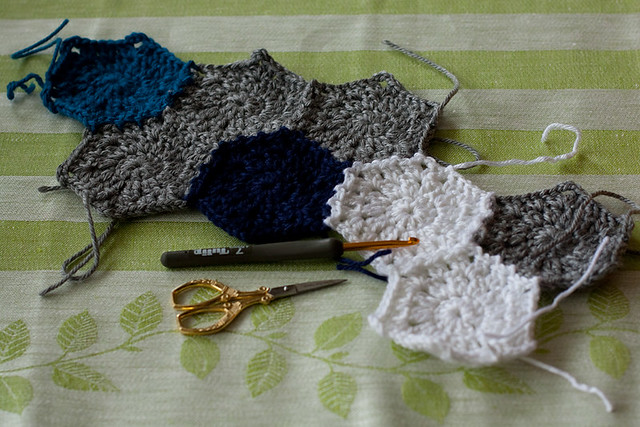 The pattern is Elizabeth Trantham's "Easy Hexagon"-- free on her blog.

Though I love the way they looked stitched together as described in the pattern, I do not love the process of sewing pieces together, so I'm opting for JAYGo.

Also, I'll probably be making the rest of the hexagons with 2-chain corners instead of three, because it works out better for JAYGo.  (I'm hopeful that the switch from 3-chain corners won't be visible... I don't think it will be, in the finished project.)

Making the little hexagons is fun.  Seeing the blanket grow piece by piece is fun (and pleasantly reminiscent of a tile-laying game).  Weaving in those ends... not so fun.  Must keep up with end-weaving!

The other day, I was reminded of some steel crochet hooks I bought in a thrift store on our last trip to Sweden (summer 2013).  I'd completely forgotten them.  I wasn't going to bother, because they're so tiny that I doubted I'd use them, but Donald insisted, and they cost next to nothing, so home they came! 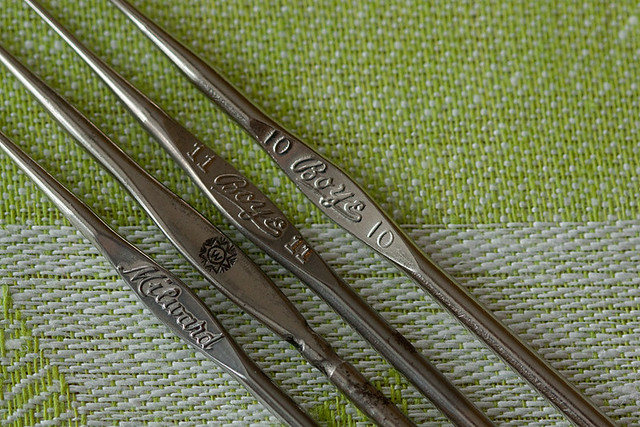 The Milward hook is size 14, marked "Made in England".  I have no idea what size 14 is in millimeters, but it's definitely not the 2mm that the first Milward chart would suggest.  (It's the leftmost hook in the photo below.  See how tiny?!)

Ah, here's someone saying that Milward hook sizes 13, 14, 15, and 16 are used for tatting threads-- #60 and #80.  Phew.  Um, maybe not.  I'll just give this hook a nice place to live, for the time being.  Maybe someday it'll find a new home with someone who doesn't shudder at the thought of crocheting with tatting thread. 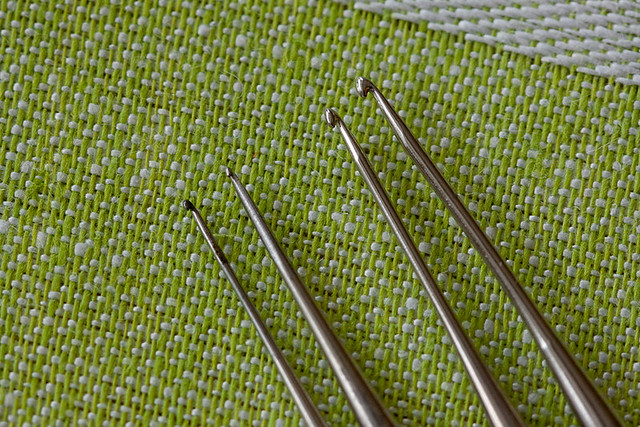 The last of the four hooks-- the one marked with a "W" on the thumb-rest-- has "NORICA" engraved near the bottom of the handle: 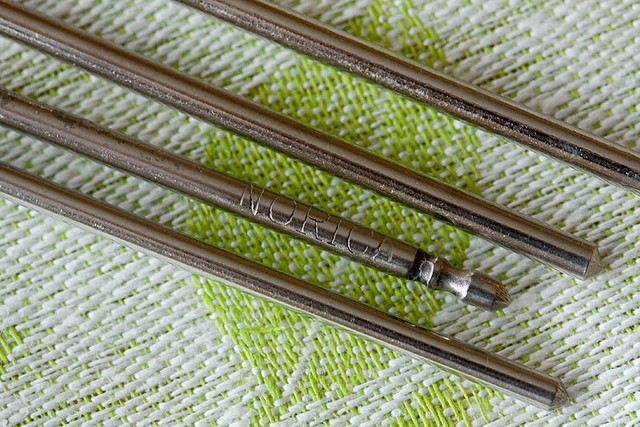 That one's a bit of a mystery.  I'm having no luck at all finding anything about crochet hooks marked with a "W" (inside a symbol of the sun... or the compass...) or "NORICA".  There's also no size marking, but I'm less interested in that than in just learning what company made the hook.  I'll keep looking...