October 02, 2014
Last week, I decided to call the Frosting Cowl finished.
(And now I'm going to blather on about it for paragraphs.  Apologies.) 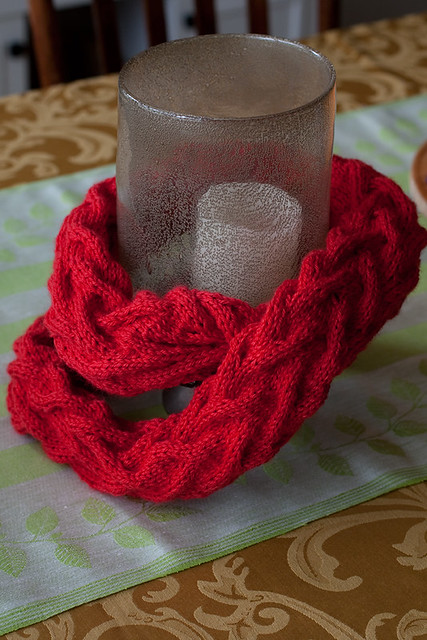 I weighed my leftovers (from two balls, because there was a knot near the end of one, so I went ahead and joined the next ball early), and it turns out I used less than I expected-- 2.62 skeins (531 yards).  I could've kept knitting on it, but it was time to stop, and I think it's plenty big enough.

I mentioned in an earlier blog entry that this was my first time using a provisional cast-on.  Are there multiple methods of provisional cast-on?  I imagine so.  Anyway, I used one that starts with a crocheted chain of scrap yarn.  (You'll find a link in my Ravelry project notes-- see link above.)  It wasn't exactly difficult, but getting the knitting needle into the chain wasn't the smoothest thing I've ever done, either.  Undoing the chain and "reclaiming" the loops seemed much easier.  The whole process wasn't bad at all, though, so there's no reason to avoid patterns that call for a provisional cast-on.  (Another technique in the bag of tricks!)

The lady in the video I used for picking up the stitches again (see Ravelry project notes) had a tip for avoiding the fluff that gets in your project if you use yarn for the provisional chain.  Simply make the crochet chain from something other than yarn!  She recommended using a thin ribbon or cord-- something smooth.  Because it comes off neatly in one piece, you can use it again and again, too.  (Of course, I didn't have that much trouble with fluff from the scrap yarn.  There was a little, but not much, so I'm not sure I'll bother, if I even remember this tip for next time...)

There were two more firsts in this project-- fake moebius and Kitchener stitch.

Though the pattern mentions the possibility of flipping one side 180° before grafting, I hesitated, because the “right side/wrong side” thing confused me. How would that work?  Wouldn't the wrong side of the cables show?  But then I read somewhere on the forums that the moebius is meant to counteract the effect of twist that naturally happens when you wrap the cowl around your neck twice. That’s how I plan to wear this, so I gave the moebius a try.  (It's not cold enough to wear, yet, but it'll be interesting to see how that works out under "real life" conditions.)

As for the Kitchener stitch, it wasn’t nearly as complicated as I'd expected!  I did have to undo/redo a bit of it, though, because I got distracted and messed up something.  Distraction is likely, because it’s a little mind-numbing-- but still complicated enough (for a newbie, at least) that it requires attention.  It also made my hand go a bit numb with the unaccustomed motions, so I wouldn’t want to do tons of it at one time. Repeating the mantra (knit off, purl on; purl off, knit on) aloud as I performed each step was helpful. …So it's probably best to not do the Kitchener stitch in front of strangers.  ;o) 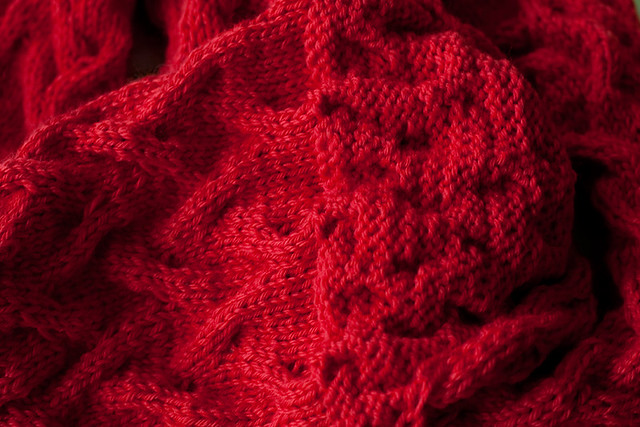 I’m not sure how well I did it, because since I did turn this cowl into a “fake moebius”, I was grafting right side to wrong side.  As such, it would be perfectly clear where the join happens, no matter how skillfully the two ends were grafted together-- but I think it looks pretty nice, and I’m happy to have Kitchener stitch under my belt for future projects!  It's certainly nothing to be afraid of.  I just need to remember to focus on what I'm doing, not let my mind wander, and keep repeating the mantra (aloud, if necessary). 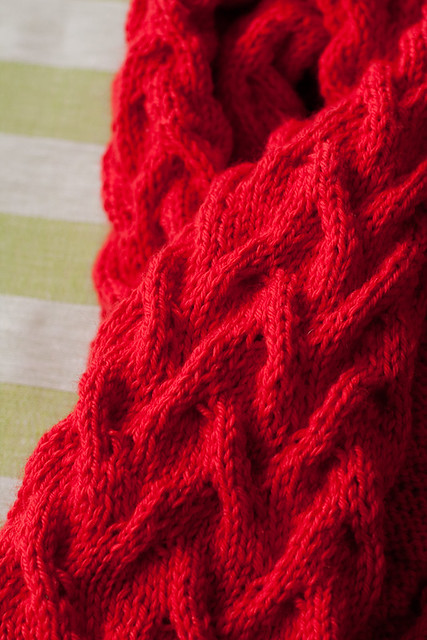 I suppose I'll wash it, next, but I'll skip blocking-- just flatten it out to dry-- because this yarn has a reputation for growing like crazy, and I'd rather this cowl didn't stretch.  (If anything, I'd have preferred tighter stitching.  Yeah, I know; I should've swatched. ;oP)


After that, it'll be stowed away in the appropriate drawer to await the first serious cool snap.  It shouldn't be too long, now.  Some local forecasts predict lows in the upper 40s on Sunday morning!!