October 21, 2014
I've been playing around with paints-- acrylic and watercolor-- off and on (mostly "off"), for the past several months.  Just for the fun of it, mind you!  No formal training, as they say.  I used to love drawing and coloring with crayons, markers, and color pencils, as a child.  I still like doodling, on occasion.  However, while I was fairly good at drawing-- for my age-- as a child, I'm afraid that my artistic skill stopped developing, at some point.  Sadly, I can no longer say I'm a decent artist for my age.  ;o)

Well, if I can make something I'm not ashamed to hang in our own home, that'll be satisfaction enough.  I can only improve with practice, right?  And it's a very engrossing pastime... Pleasant, too, until you realize you've just messed something up royally and will have to try to fix it, somehow.

Donald has painted/drawn pictures as gifts for members of his family, before, but he's yet to make anything for us to keep.  I've asked before, but he has other hobbies he enjoys more, I guess.  Maybe if I nag with enough persistence... Or if I hang twenty or thirty of my own "masterpieces" throughout the house, perhaps he'll be inspired to contribute to the gallery.  (g)

I would ask for kindness, gentleness, etc.-- but I've long since turned off comments (because I'm shy)-- so there's no need.  ;o)

Until today, I hadn't photographed the first "dabbling" with acrylics on canvass, because it was such a copy-cat project.  I took the idea from something on Pinterest.  It turned out okay, but I think I probably went a little overboard with too many little dots of color (and not enough nuance).  The original is much nicer, but at least this was still fun to make (and looks better from a distance, I think): 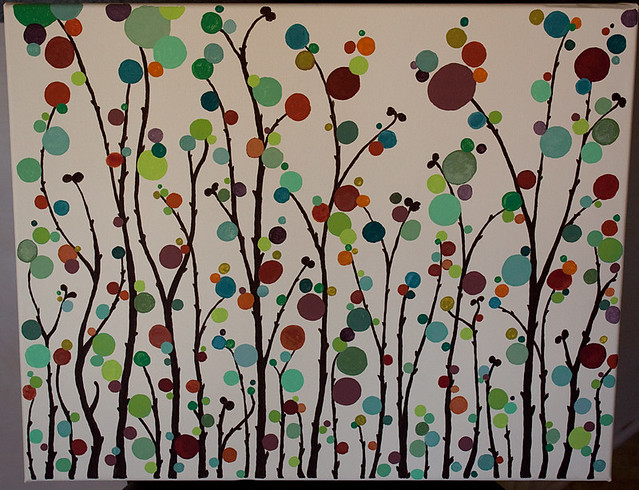 For the second canvass, I went off in my own direction, and it looks... :o/  Like something you'd find hanging in the room of a 7-year-old who loves pink glitter and purple ribbons and asks Santa to bring her a unicorn for Christmas?  (g) 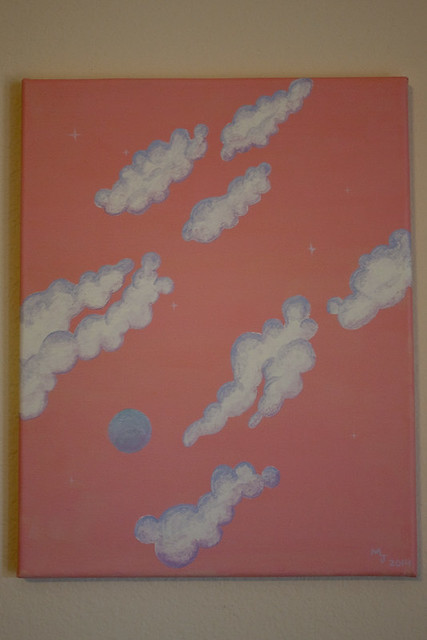 See that weird purple moon?  That's what happens when you try to paint the silhouette of a bird in flight-- something better than the old "M" birds we all know so well-- are horrified with the results, gripe and stomp for a while, then settle down to figuring out what in the heck you can do to salvage the mess.  Hm... Purple moon it is, then!

After the incident of the horrifying bird, I thought that maybe it was time to take a break from the acrylics and try my hand at watercolors.  Donald had bought some watercolor supplies back before we met.  I'd tried them once before, but I was a bit too "sketch something in detail and then stay inside the lines" with that attempt.  This time, I found an example of a somewhat looser style and let that be my inspiration.

I was actually happily surprised by that attempt: 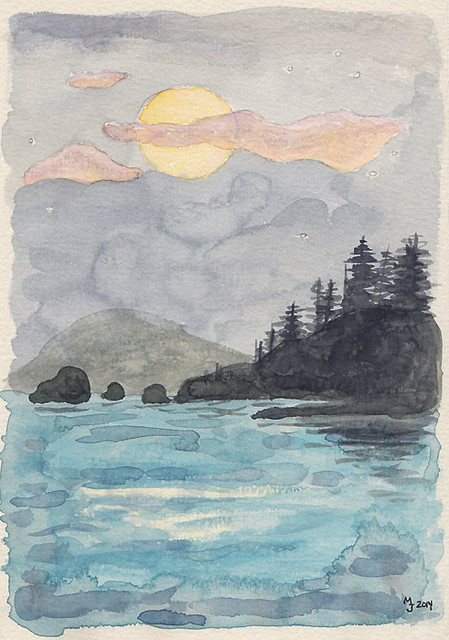 Sure, there's plenty of room for improvement, but it's not too far off the mark of what I intended.

I tried another little watercolor that same day... 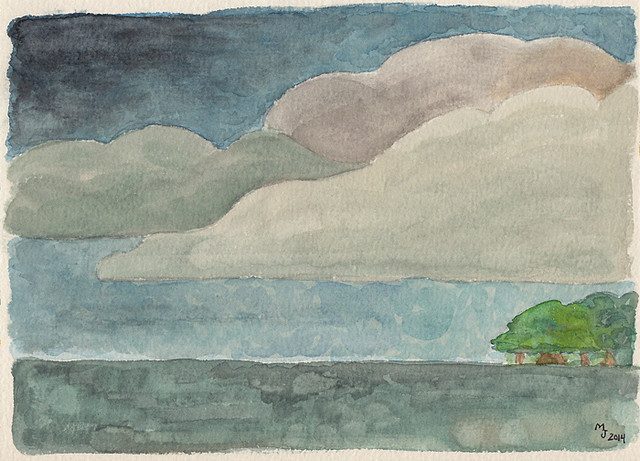 The trees are more than lacking, but I liked the clouds...  And it was fun.

After that, there was a pretty long break from painting of any kind...
Then some floral doodling colored in with watercolors... 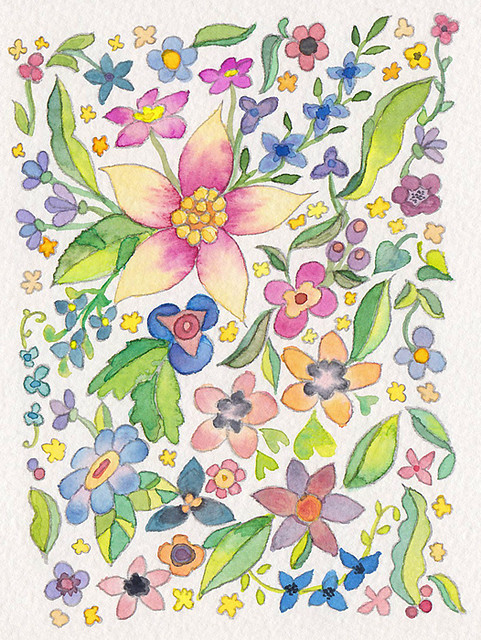 Also fun, and a good way to learn a little more about how the watercolors behave under different circumstances.

Here's the latest effort in watercolor: 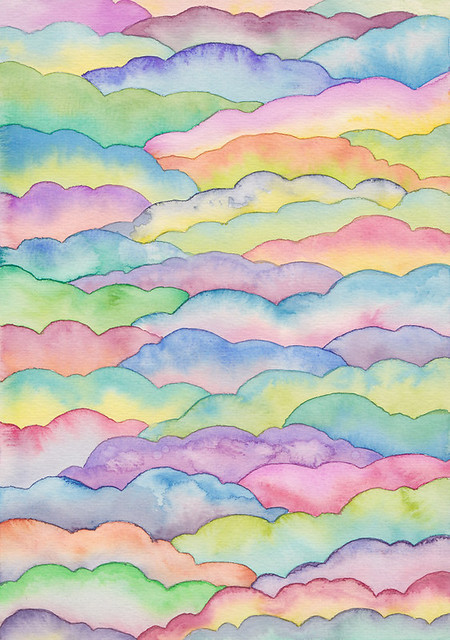 The current WIP is a pair of abstract acrylics-- another Pinterest inspiration.  I'll be sure to share a photo and a link when they're done.

From now on, there may be the occasional painting project post, in addition to the typical crochet and knitting.  I'd really like to start sewing blocks from that string quilt kit my mother put together, too, so maybe there'll be sewing-themed blog entries soon.  (Actually, I know there will be sewing blog posts, because I sewed a curtain a month ago and have yet to photograph it-- and there's another curtain cut out but not yet sewn together...)