March 09, 2019
Oh-so-long ago, I blogged about how I liked this quilt pattern I'd seen online, "Rainbow Rows", by Lissa Alexander.  I ended up making a version of it-- if you use the very loosest definition of "version".

Basically, it ended up as a collection of 9-patch blocks made of light-and-dark four-patches and larger squares of low-volume fabric.

I didn't feel up to the challenge of setting them on point, so I didn't, and apparently that on-point setting was a big part of what I liked about the inspiration quilt.  That isn't to say that I don't like my version at all, but it's not quite as charming as the original layout.  Also, after making that change, it bears little resemblance to the inspiration quilt. It's not so much "Rainbow Rows" as it is "Rainbow Slant".

I didn't manage to take any good "whole quilt" photos.  (Really do need to try harder, next time!)  Let's start with the photo that shows the most of it at one time... 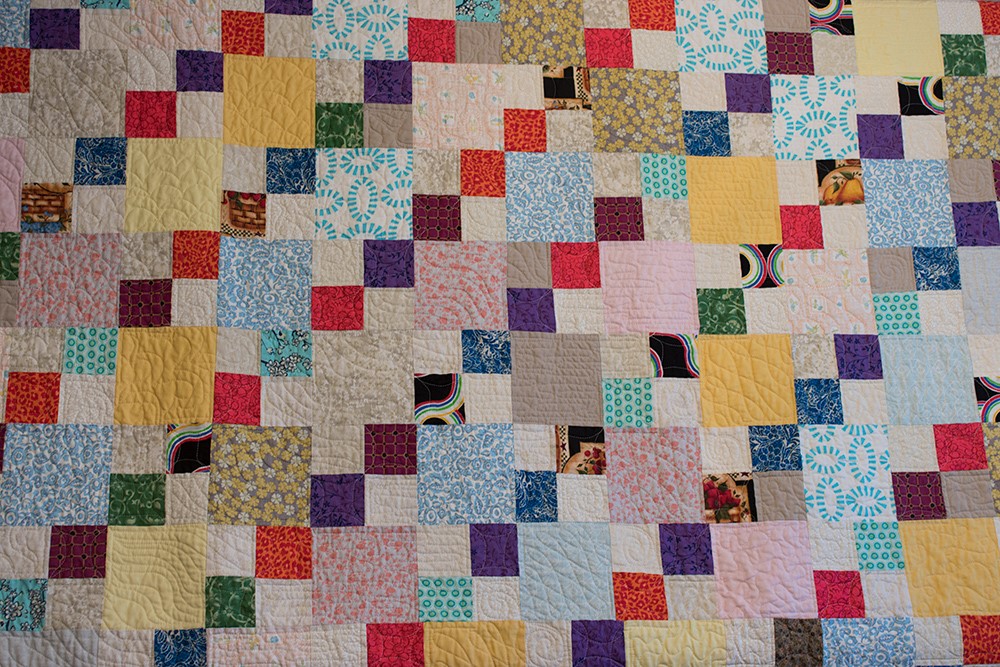 (Some of the photos are a little blurry, too... Oops!  But I think they still get the point across.) 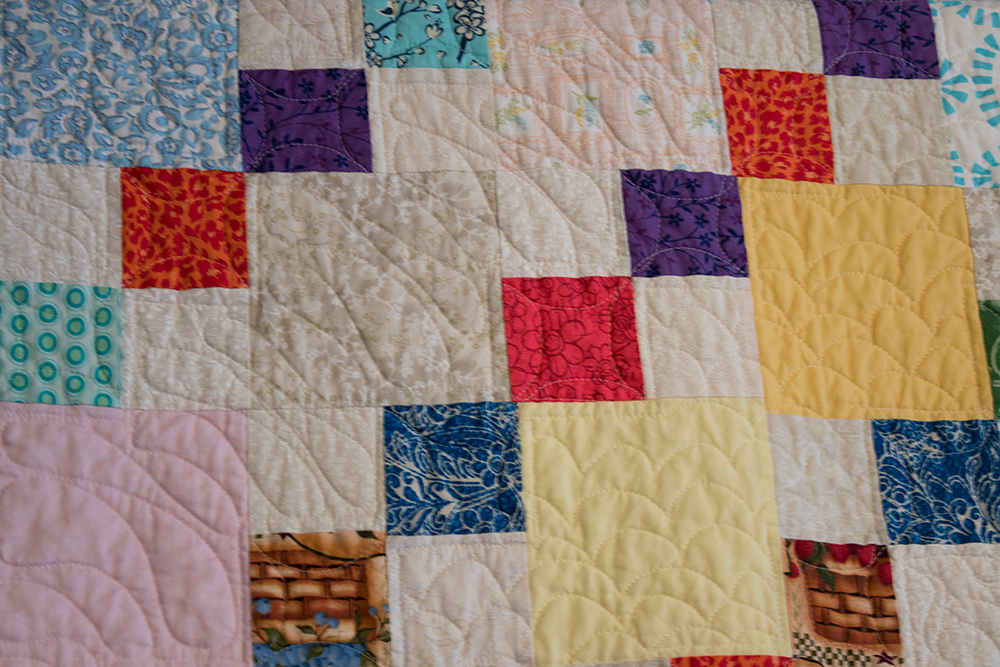 There are some odd fabric choices in this one-- some I wouldn't make again.  It's a bit of a mishmash. 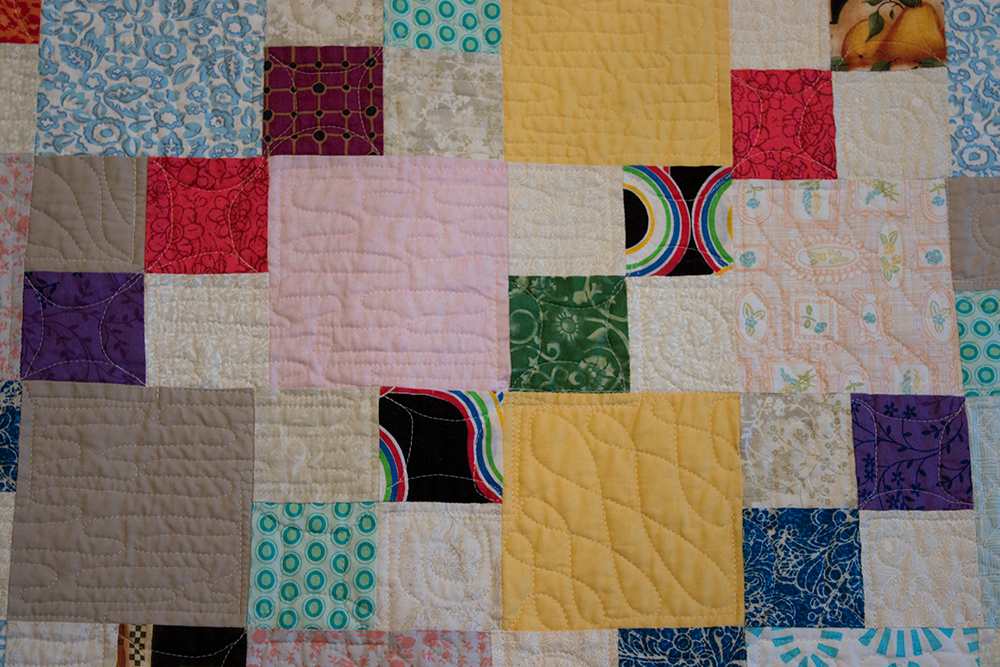 Looking on the bright side, maybe that makes it feel scrappier, and I do love scrappy quilts!  I think it's fine from a distance, even if one or two of the fabrics doesn't really "fit in" on closer inspection. 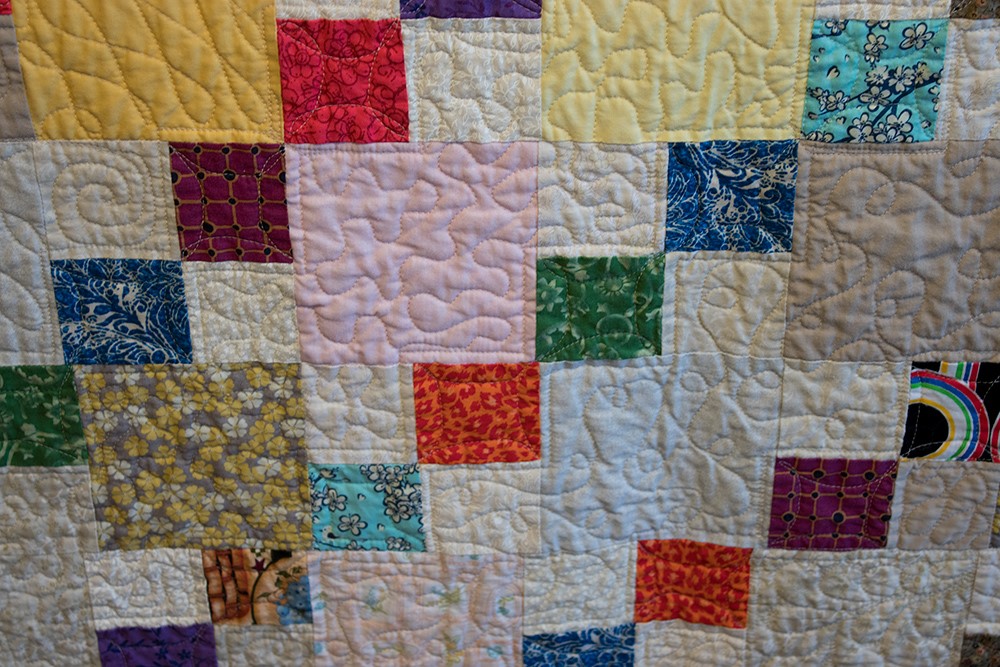 After my experience with the crumby dog quilt-- ah, excuse me, "Crumbs to That!"-- I at least had a basic plan in mind.  I wanted to echo the diagonal line of the darker blocks, then fill in each wider diagonal of low-volume/neutral fabric with a variety of free motion quilting patterns.  (I didn't plan in advance which particular ones I'd use.)

Oh, and I'd do continuous curve inside the darker squares, too. 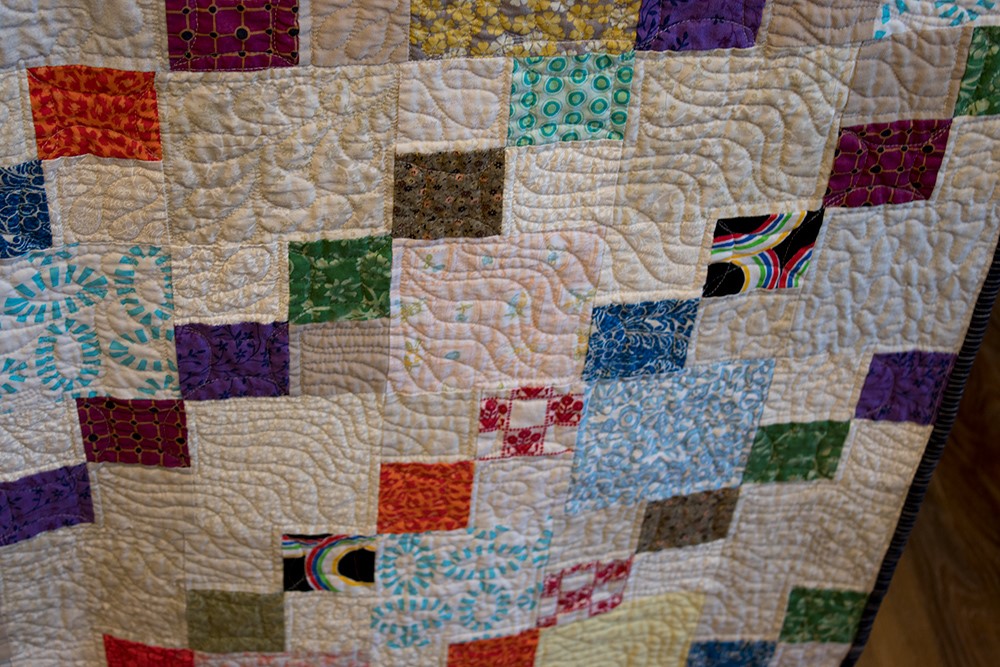 The continuous curves were sometimes pretty messy.  I need more practice on that, and maybe I should slow down a bit more next time... But hey, they're done, and from a distance, they don't look bad. 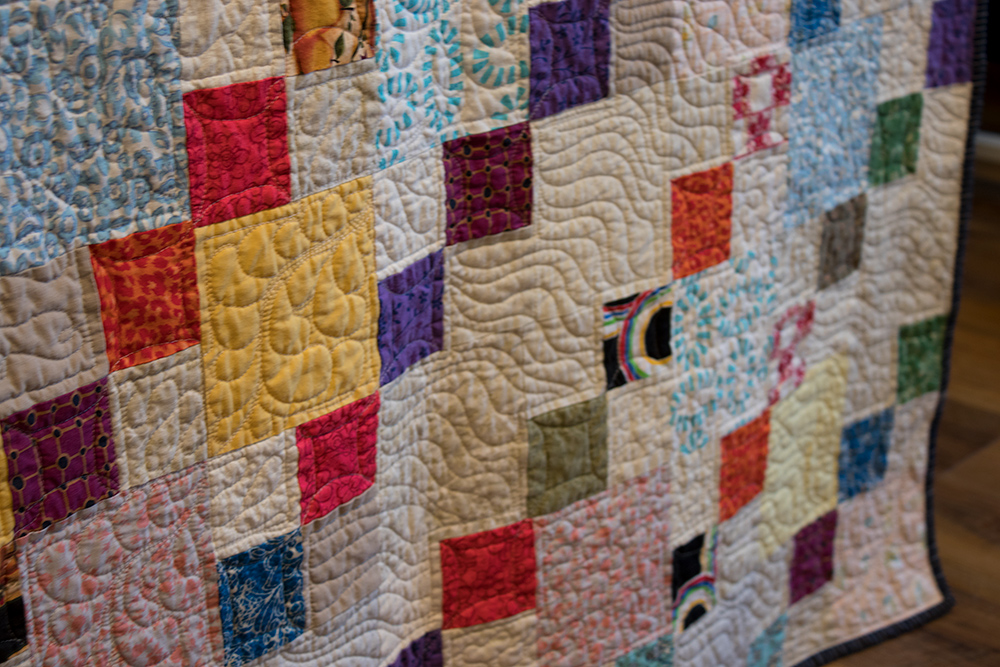 As for the echoing around the dark diagonals, I started out using a ruler (for the first time-- eek!), but (surprise, surprise) using rulers seems like it will present its own challenges and learning curve.

Using the ruler to outline ("echo") the darker squares was working, but it was also slow and sometimes a bit awkward (for me, as a beginner).  At some point, I decided to just eyeball it, and I liked that better.  It wasn't as precise, but it was definitely much faster and less irritating.  Maybe the rulers are better for other applications; I undeniably need more practice. 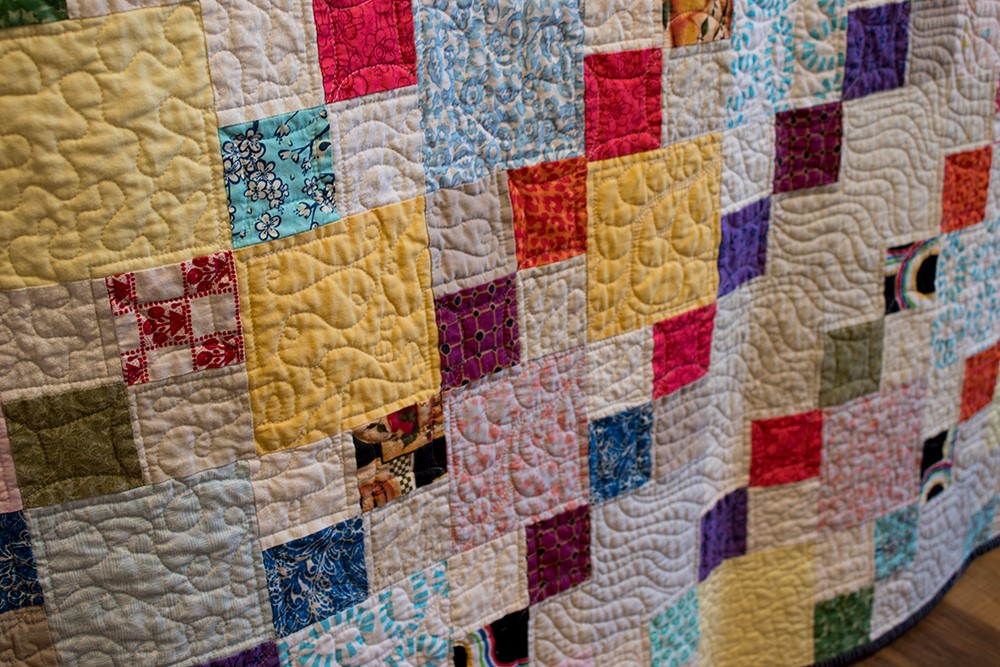 Then there were the free motion fillers.  I kept them on the simple side, mostly, and did repeat some of them when I ran short of ideas (and the energy/courage to try something new).

Let's see... I did wavy lines (maybe aka serpentine lines?), basic meander, loops, wishbones, ribbon candy, water... some messy "bump back" feathers... some similarly messy swirls... and some exceedingly messy scallops/scales.  I really should've taken a break instead of doing those scallops.  Live and learn!  Maybe next time I'll listen to my own better judgment and stop when I start to feel the "just finish it already" mood creeping in.  There was also a half-hearted attempt at hooked swirls that I really should've thought better of.  (I need to practice those types of patterns on something where I can see what I'm doing a little better than I could on these prints.)

Occasional messiness aside, I think it turned out ok.  Especially after washing, which crinkled the quilt so much that it hid a multitude of sins sloppy or imperfect stitches. 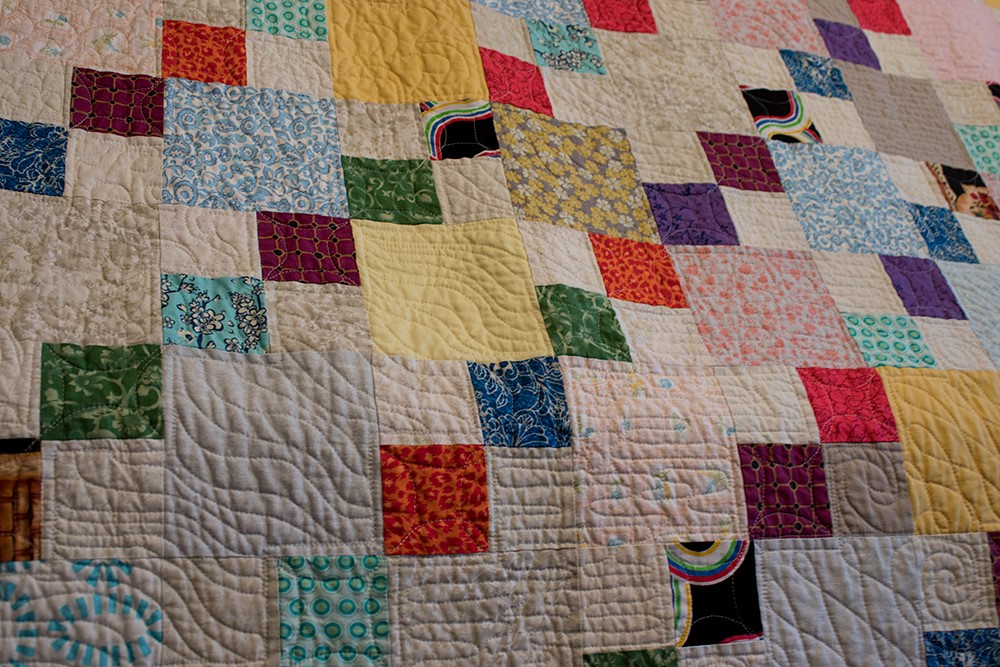 There's a science (or maybe an art) to planning out your stitching so that you can stop the pattern when you get to the end of your workable space (the part of the quilt the quilting machine can reach at a given time), advance the quilt on the frame, and pick back up with the same pattern again.

I'm sure that gets easier with practice, just like everything else. 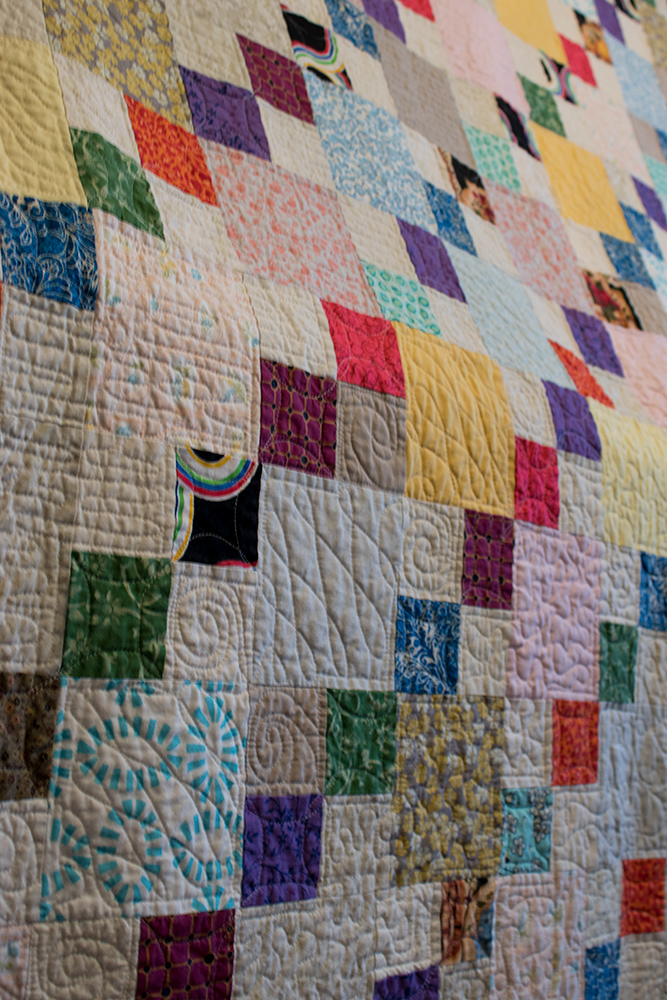 The backing for this quilt is another cream/white sheet.  Boring, I know, but it was bought (extremely) cheaply and already in the stash.  I'm not that bothered by the backs of my quilts, at this point.  I mean, sure, if I have enough of a nicer, prettier fabric to use, I'll be happy to do so (if I can bring myself to "waste" pretty fabric on the back), but how often will I really be looking at the back of these quilts, honestly?  It's just not my priority, for the time being.

The batting is cotton with a "synthetic stabilizing scrim binder".  This was my first time using a cotton batting in a quilt.  I'm very happy with how well it "crinkled" after washing, and it's lightweight, which is another plus, as far as I'm concerned. 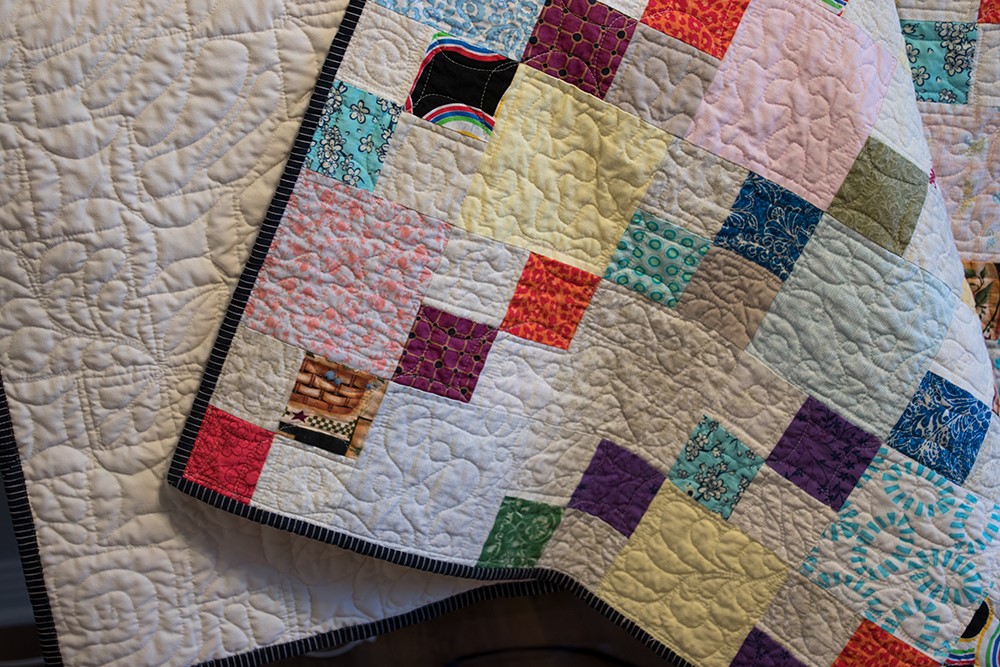 The binding is some fabric Donald's mother gave me, years and years ago.  It's found its way into a variety of projects, along the way.  As I mentioned in my last post, I somehow managed to make too much of this binding (I think I miscounted/misremembered how many folds of fabric there were when I cut the strips), so I ended up with a lot of leftover binding.

Fortunately, I think this fabric (white-striped navy so dark it's almost black) will do well for a multitude of quilts, so I probably won't have to wait too long to find another use for the leftovers.  (And it will be nice to not have to make binding for that future, unknown quilt!  Making and attaching binding is a project in itself!) 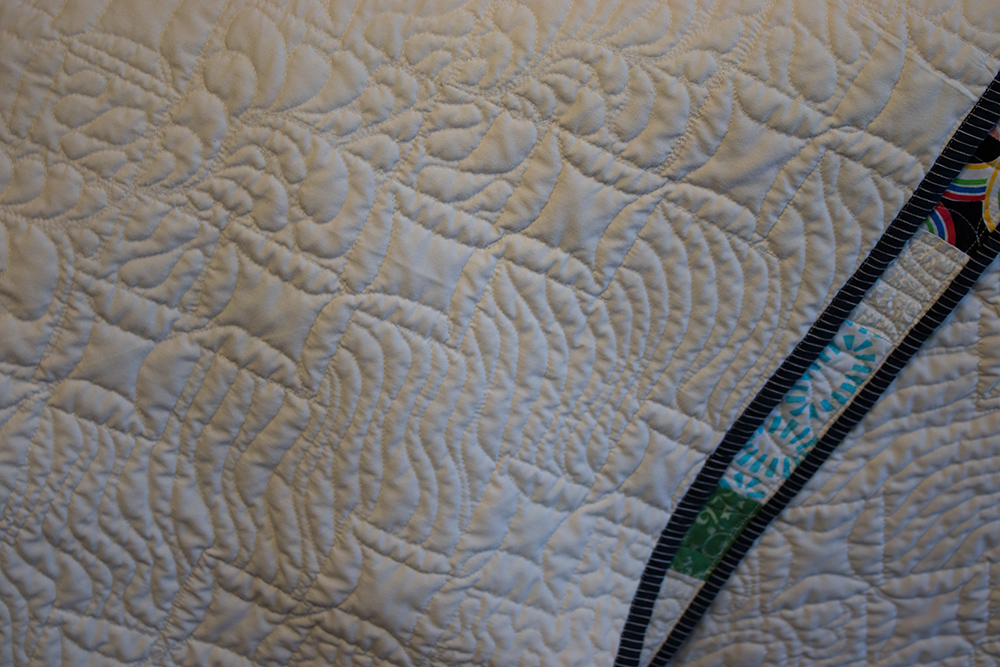 ...Here are some photos of the back of the quilt... A close look reveals some inconsistencies (especially in the continuous curve) and "room for improvement", but the overall effect isn't bad, I think. 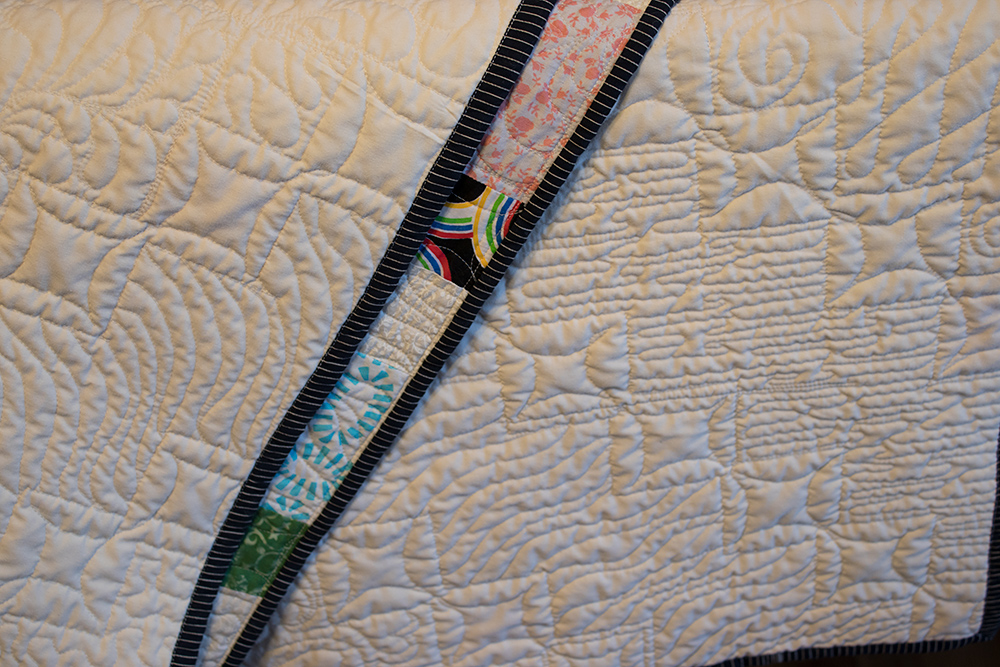 And of course, I won't be displaying the back, anyway, and the colors and prints of the front should help to hide most problems pretty effectively. 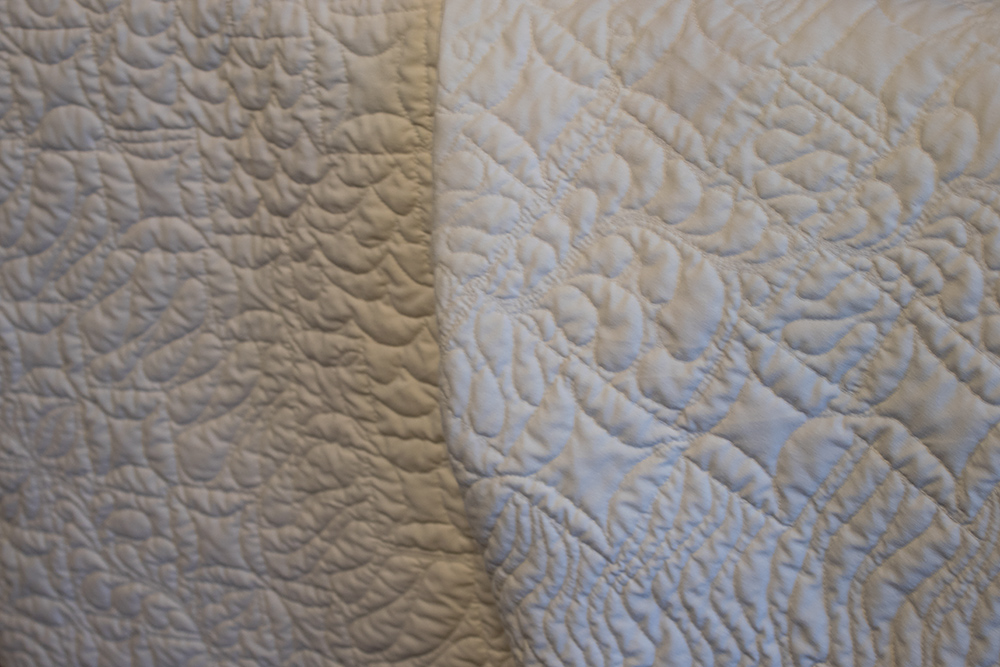 So, I think that's nearly it for this blog post!  One more quilt completely done! 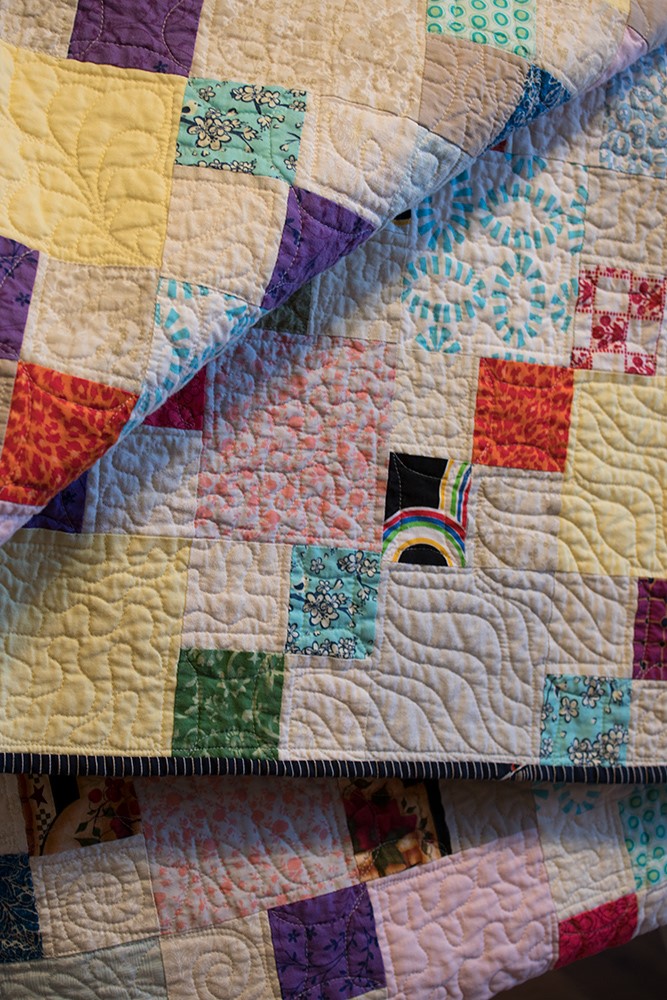 Flaws and all, this one makes me happy. 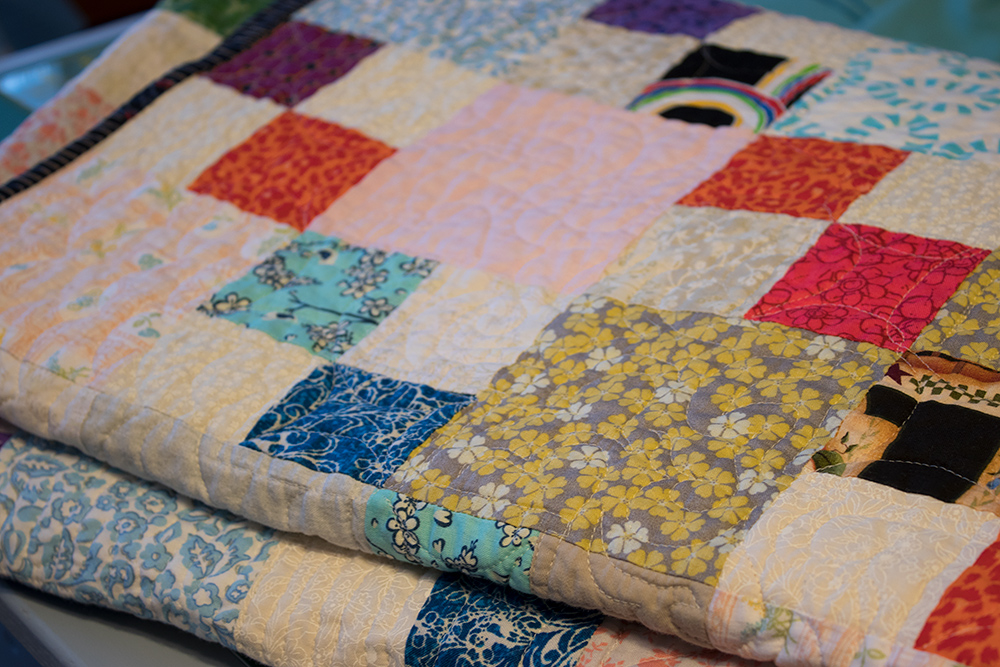