March 06, 2019
I like the idea of naming things, but sadly, over the years I've come to accept that I'm maybe just not that great at coming up with names.  I tend toward the obvious/literal, and if I try to venture out from that into something more creative, I feel like I'm being obscure or pretentious or... just weird.

What brought on this bout of self-reflection?  Why, trying to come up with a name for a recently-completed quilt, of course!

It's a crumb quilt.  I'd like to think I'll make lots more crumb quilts, in the future, and don't really want a series of "Crumb Quilt the Second", "Son of Crumb Quilt", "Crumb Quilt 4: The Crumbling", and so on.  Begin as you mean to go on, so I need a real name (even if it is "just" a dog quilt).

I could've sworn there was a phrase I'd heard somewhere-- on I Love Lucy or similar-- "Crumbs to that!"-- but Bing and Google aren't having any of it.  Either I misheard it-- or I made it up in my own head-- or I'm a walking pop culture reference (within a very small niche) superior even to the Internet search engines.

Presenting "Crumbs to That!"

(And yes, the exclamation mark is part of the title.  It's very important that it be included.  It makes the title.)  Don't ask for an explanation or a deeper meaning.  It's a phrase with the word "crumbs" in it.  Isn't that enough? 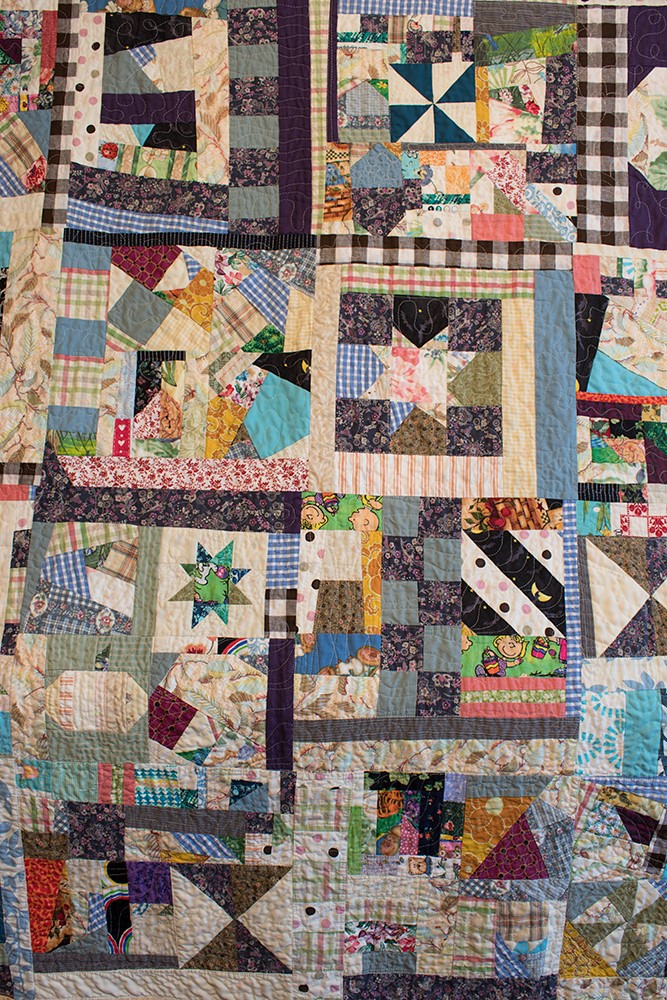 I started this quilt ~mumbles~ months... (years?) ...ago, using some of the leftovers from the string quilt kit Mom put together as a birthday gift.  (Oh, gosh, that was a really, really long time ago, hasn't it?  Time, where do you go?!)

Anyway, I used those crumbs and some parts of old (cotton) shirts... and pieces of old sheets... and some freebie fabric-- which might not have all been 100% cotton, and some of which was definitely coated in Teflon, which seems kind of gross to me, for a quilt.  That's really why this is a dog quilt; I figure the dogs won't care if there might possibly be some Teflon-impregnated fabric mixed in there. 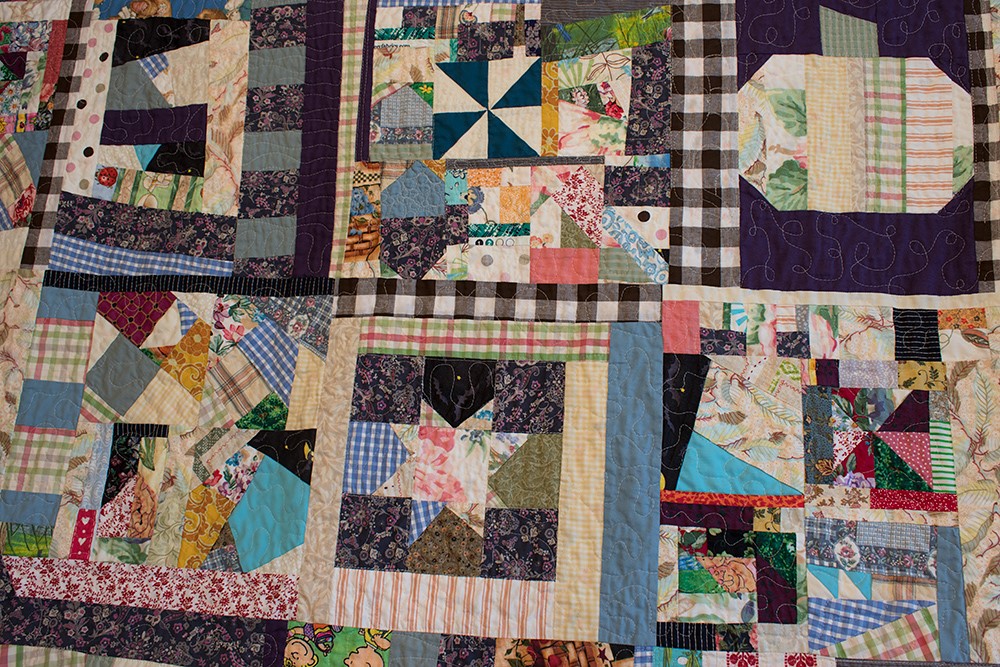 I had so much fun making those crumb blocks!  Then I decided to make them larger, which is where the longer strips came into play.  There were also a few samples I made when I was figuring out other projects. Technically, I guess they're orphan blocks. 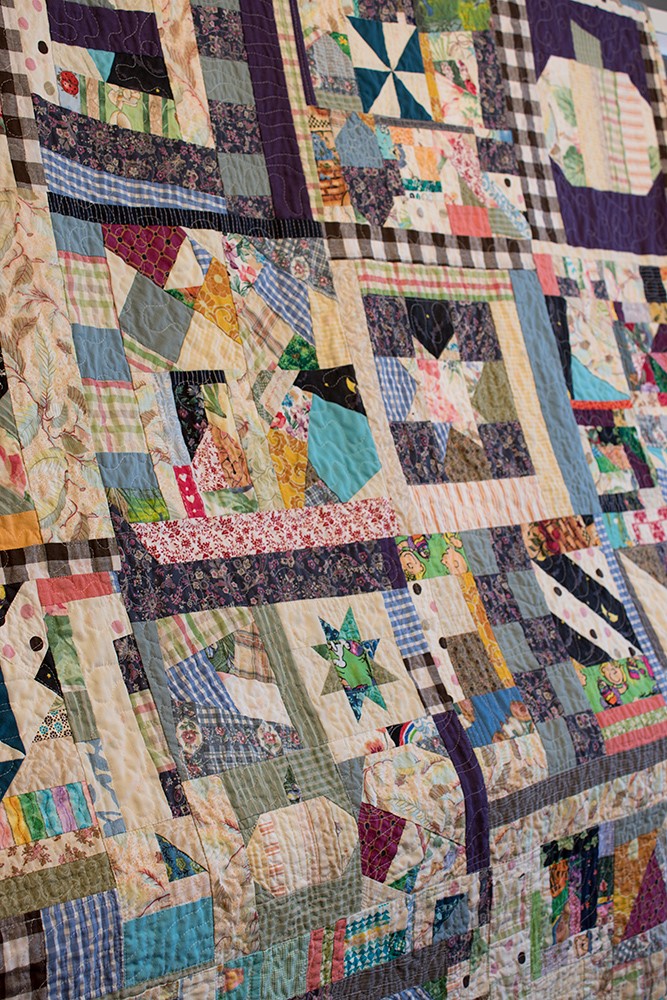 This kind of thing is so freeing to make.  No rules except to get the finished quilt top to lay flat (or as flat as possible).  It's totally crazy, without rhyme or reason, but that's okay!  In fact, for some of us, the crazier the better! 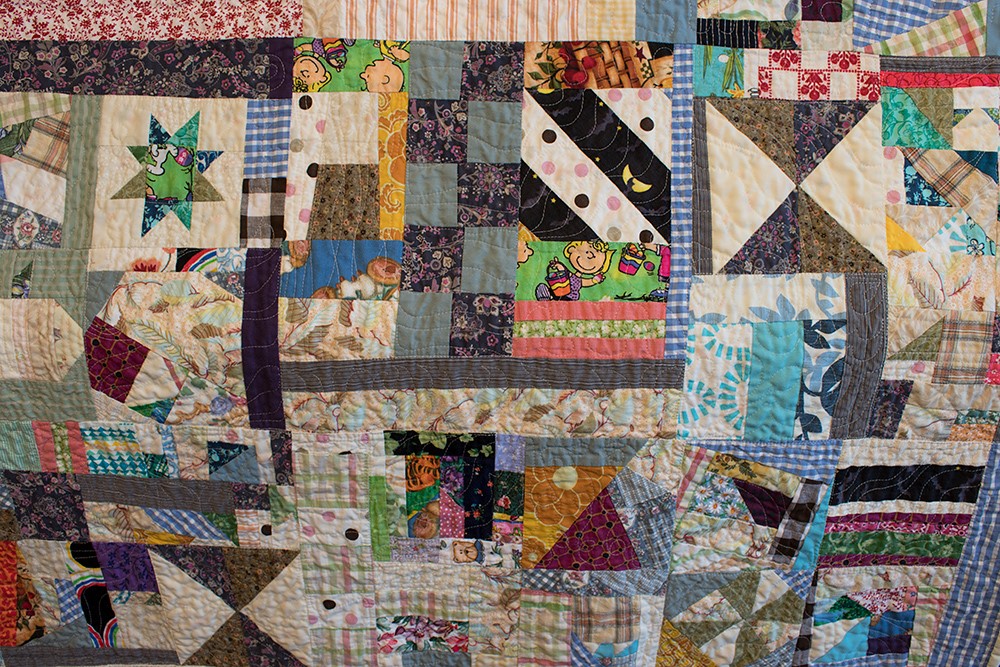 By the time I'd finished the top, I'd already decided that this would be a dog quilt, so I didn't see the sense in fussing too much over the batting or backing.  The backing is an old white/cream sheet, and the batting is a piece of flannel.

The flannel batting is white with tiny trains and teddy bears and hearts-- which do show through some of the fabrics when you give it a close look-- but again, dogs don't care about that.  It was already in the stash (free), I didn't see myself using it for anything else in particular (other than rag quilting), and I really just wanted something to practice quilting on, so I used it.  Put with the print facing the backing, it's less noticeable from the front. 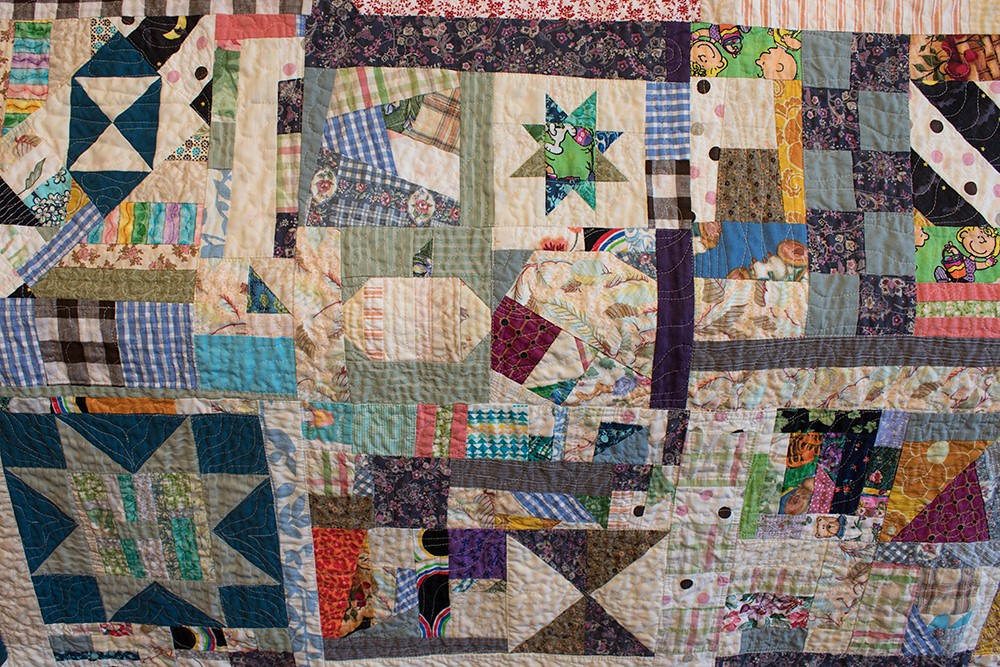 So I loaded it all on the quilting frame (with the quilting machine threaded with cream thread) and just did whatever I felt like quilting at the moment.

The first thing I learned (and it didn't take long to learn, either) is that it's tricky to quilt on the fly.  It's amazing: You turn the machine on, look down at the quilt, and your brain just goes blank!  Having some sort of plan-- even a loose, nebulous one-- seems like an important step in quilting.  Unless it's as simple as "I'm going to meander over the whole quilt", I need a plan. 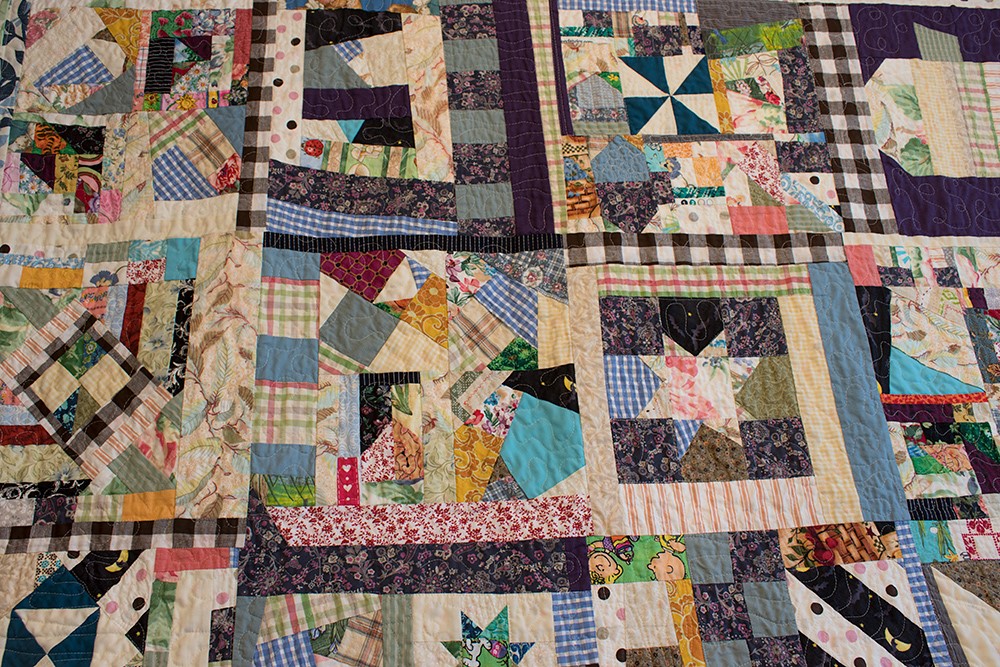 My machine quilting skills are... still developing.  That's only to be expected.  There's a learning curve, and anything like this takes muscle memory, which you can only get from practicing.  (Doodling helps, too, but that also counts as practice.)

I had fun and learned some things during the process, which is the most I could've hoped for.  It's good experience to quilt on an actual project instead of just a solid piece of fabric. 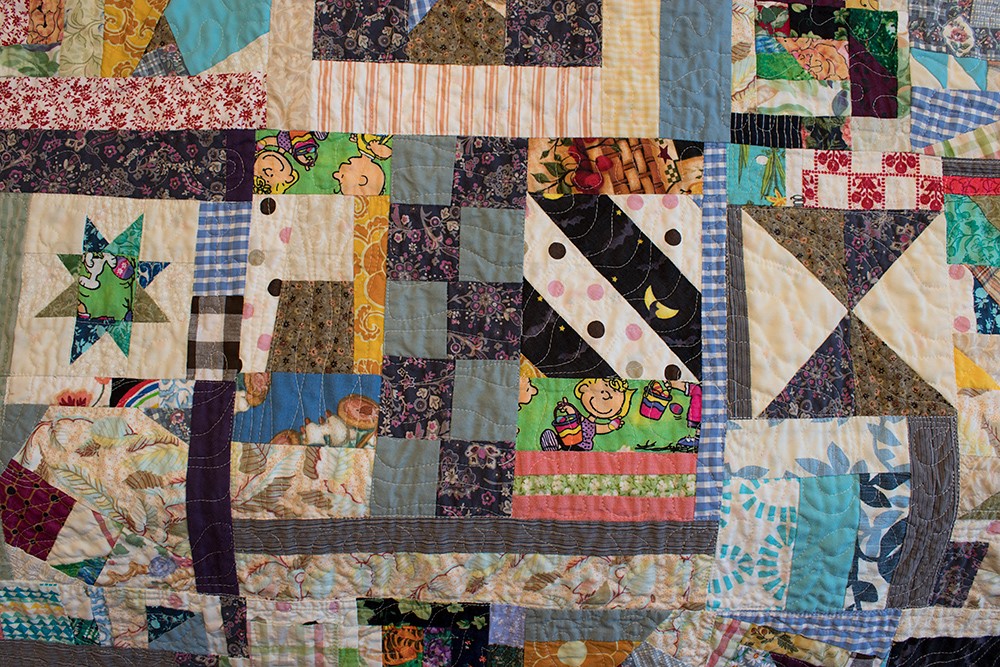 Still, awkward patches and all, I'm happier than I would've guessed with my final results.  Especially after washing.  It became more "crinkly" than I expected.  (I wasn't sure how the flannel backing would affect that aspect of it.) 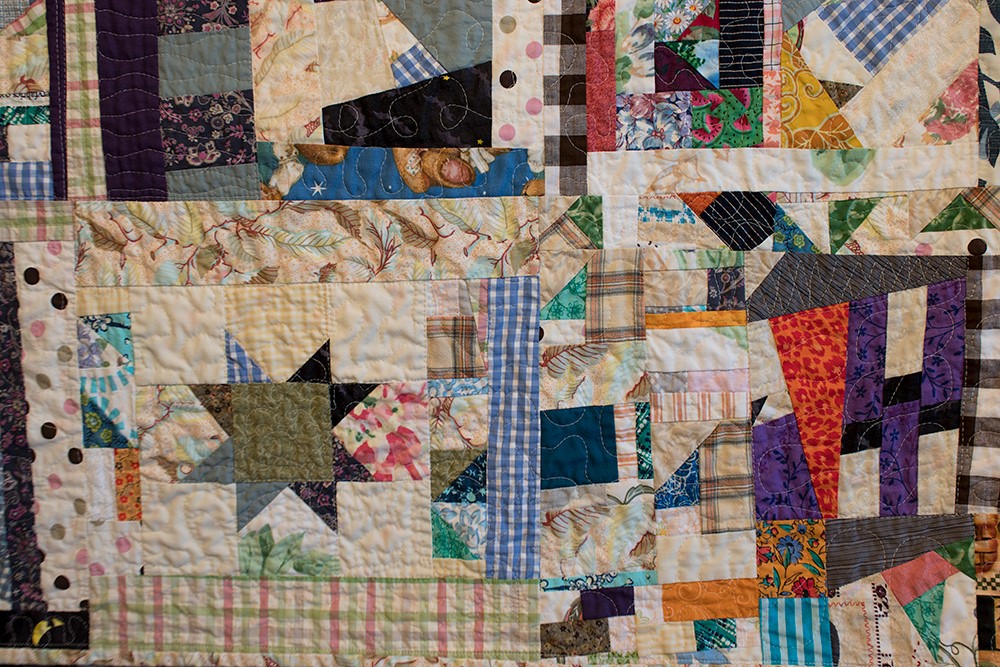 It's a very lightweight batting, of course, but since crumb quilts tend to be a little on the heavy side (all those seam allowances!), that's not a bad thing.  (Besides, this is the Deep South; super heavy quilts are rarely necessary.  I'd rather use a few layers than one thick heavy blanket, most of the time.)

(This next photo looks like it's upside down, because of the pumpkin, but that's how it was hanging, to show a part that was hidden in the other photos.  I need to find a better way to photograph quilts, because I'm having trouble showing enough of them at one time.) 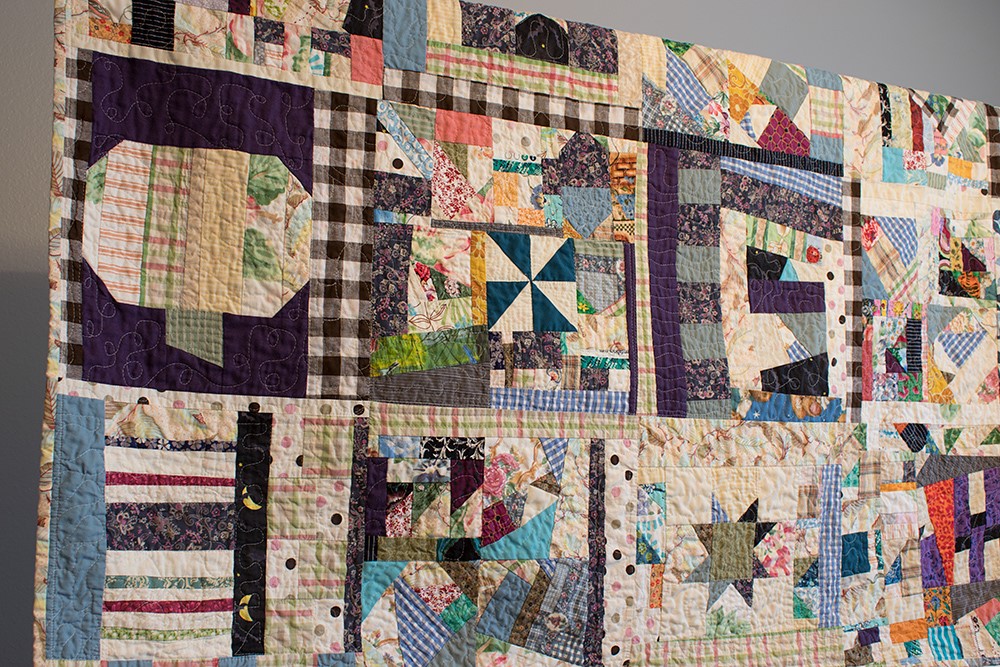 I used a scrappy binding just using up whatever I had left of the fabrics I no longer wanted in my quilting stash (Teflon, etc.).  I have an issue with calculating binding length.  I'm not sure what I'm doing wrong (math!!), but I ended up with way (way, way) more than I needed-- and I'd already done the same thing with the next quilt's binding before I bound this one and realized about my "issue".

(I'll save it and see if I can use it later. The other quilt's binding I'm sure I'll use; I'm less certain about this one's, since it has those weird fabrics I no longer want to use... but maybe I'll whip up another dog quilt, soon.) 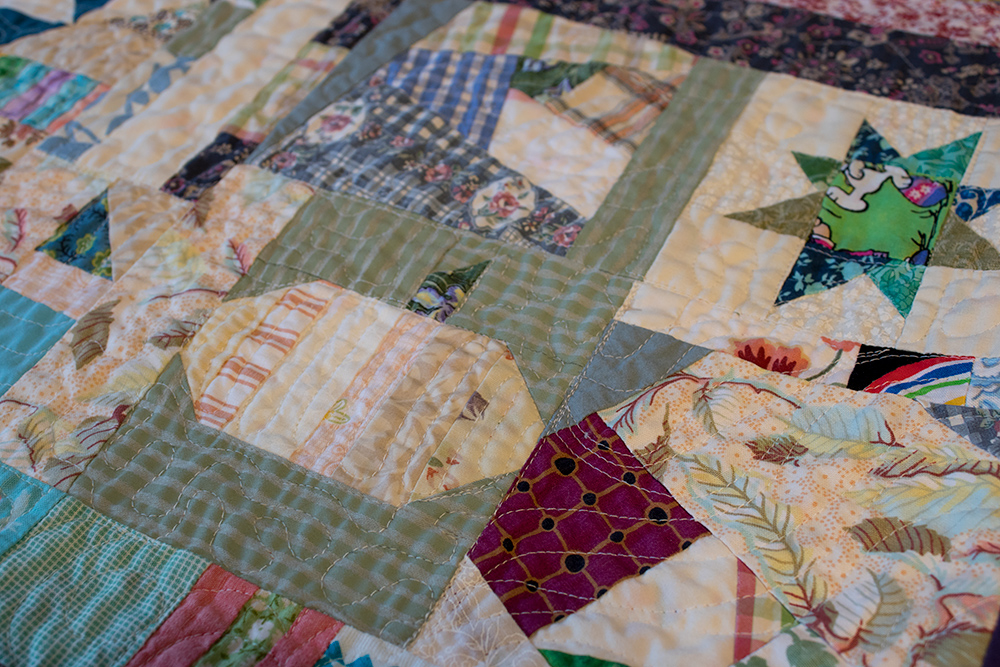 Above:  I love that pale pumpkin!!  (If I do say so myself... (g) You're allowed to admit that you like something you sewed yourself, right? Especially if you've also admitted that you're terrible at coming up with names and sometimes have shockingly poor math skills?)

Below:  I really enjoyed making this kind of "wonky star" and would love to make more of them.  In fact, a whole quilt of nothing but wonky stars would be fun. 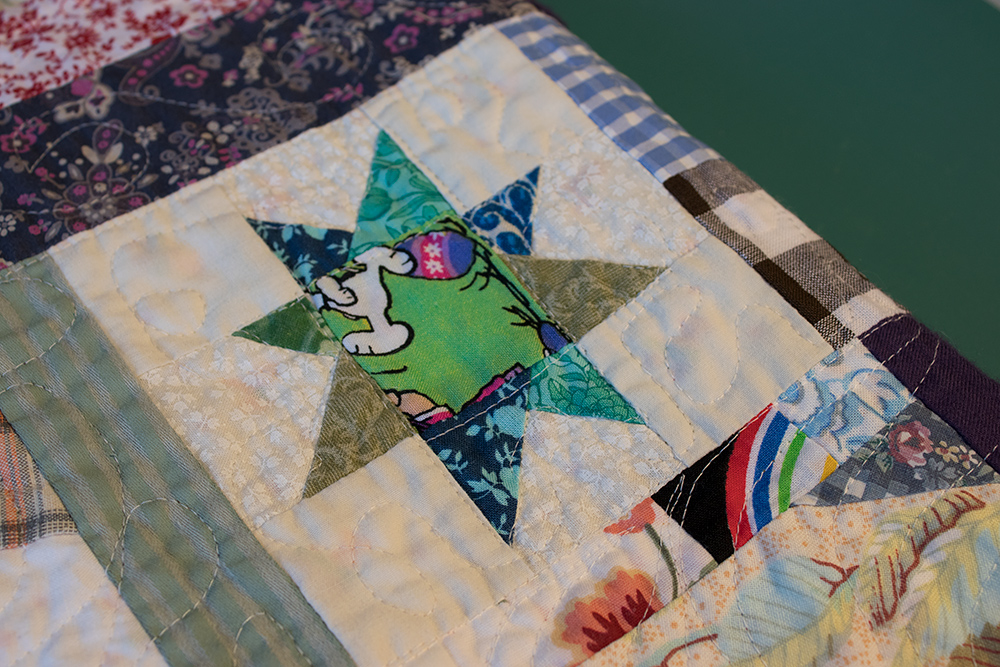 One thing I learned from this project is how much I like the effect of these wavy lines of quilting.  For something that's relatively quick and easy to do, I think they look pretty nice! 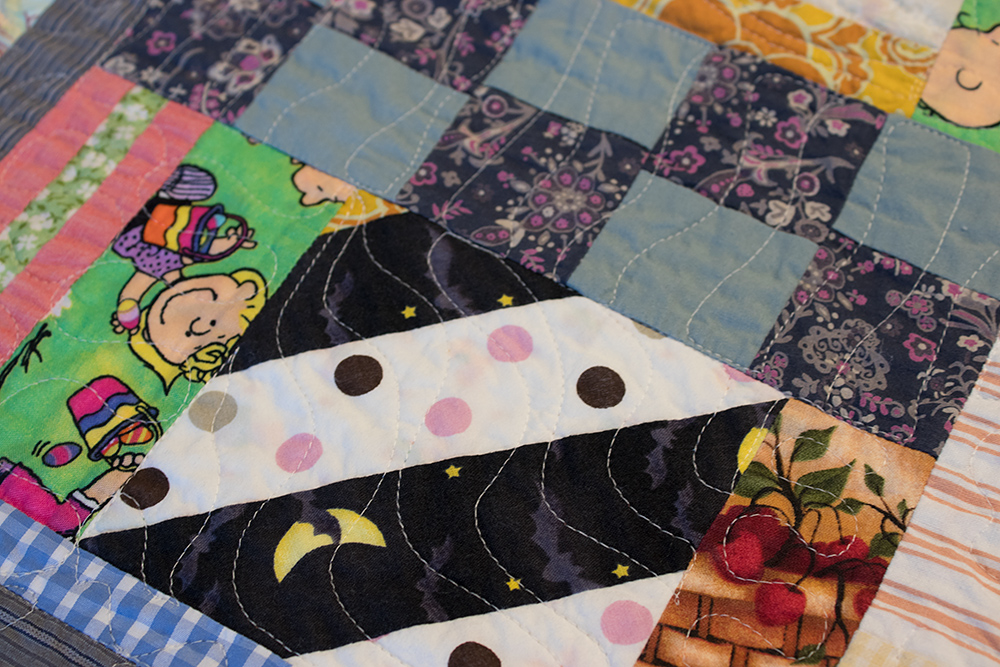 This was one of my earlier crumb units... You can tell by the variety in the fabrics.  I was still using the tail ends of the strings from Mom, at that point.  Later on, I was drawing from bigger and less varied scraps, so the fabrics got much more repetitive and boring. 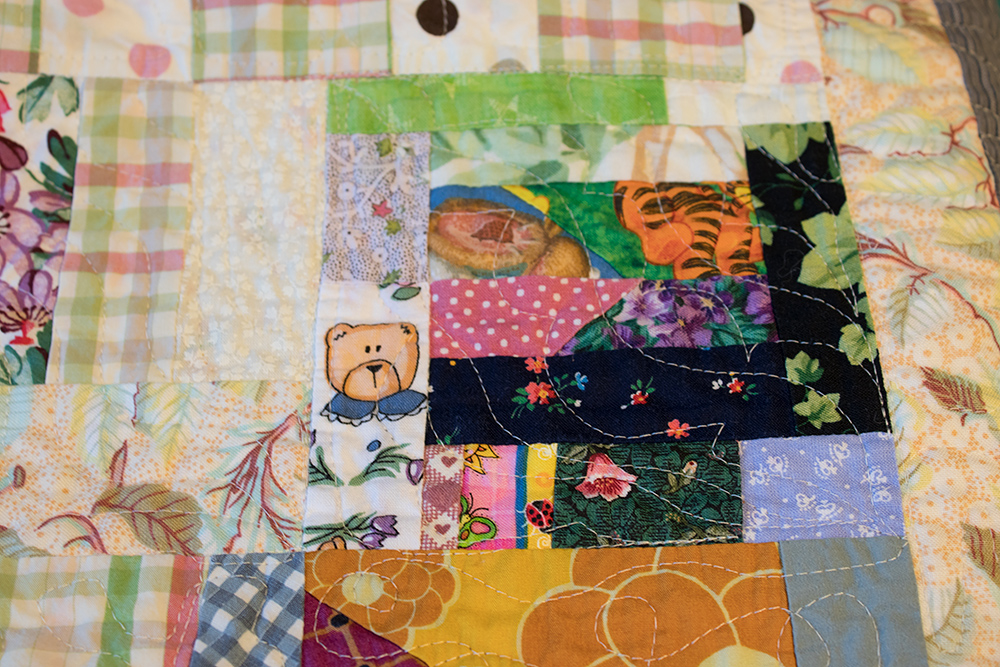 Surprise lady bug! ;o)  (Hey, there's another in the photo above, too, I just noticed!  Not to mention the bit-o-Tigger and teddy bear cameos...) 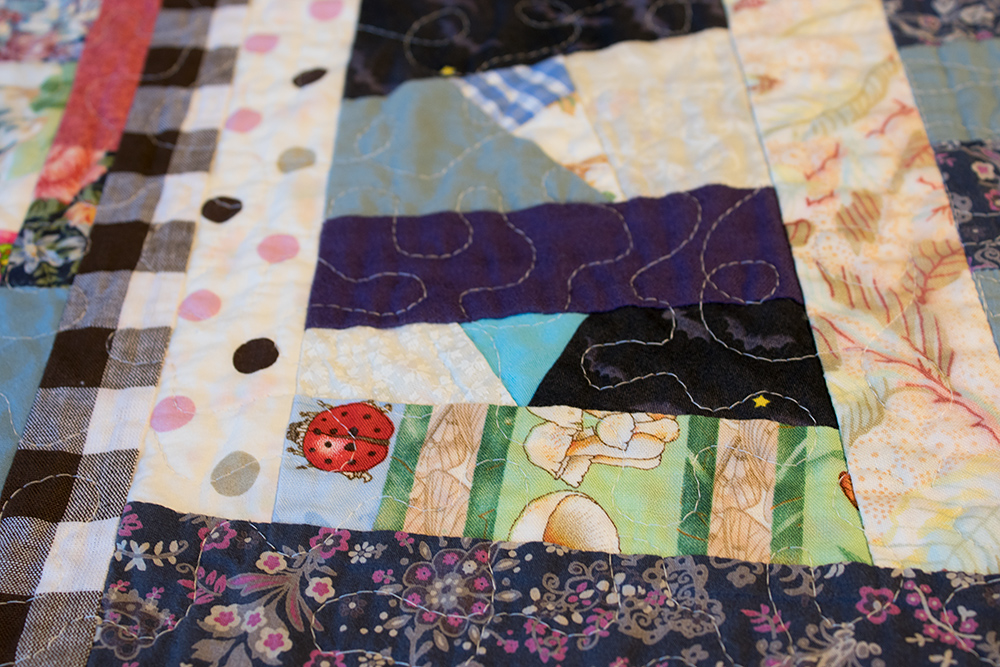 Another wonky star... Stars are my favorite kind of block, I think. 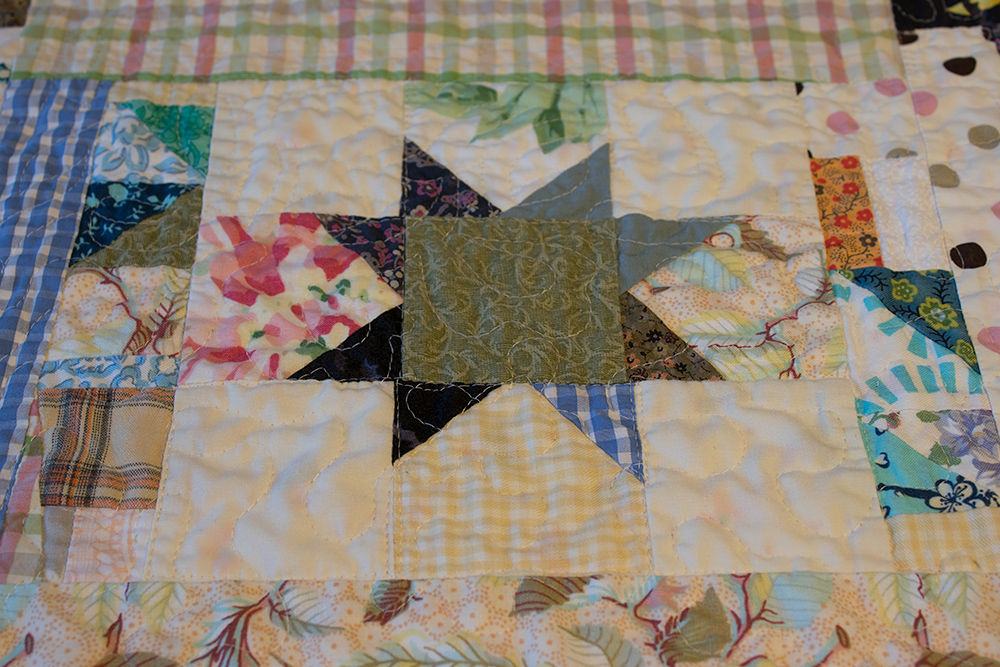 The last photo gives you a sneak peek at the fairly boring backing and binding.  See the print from the flannel?  It's definitely there, but I don't mind. 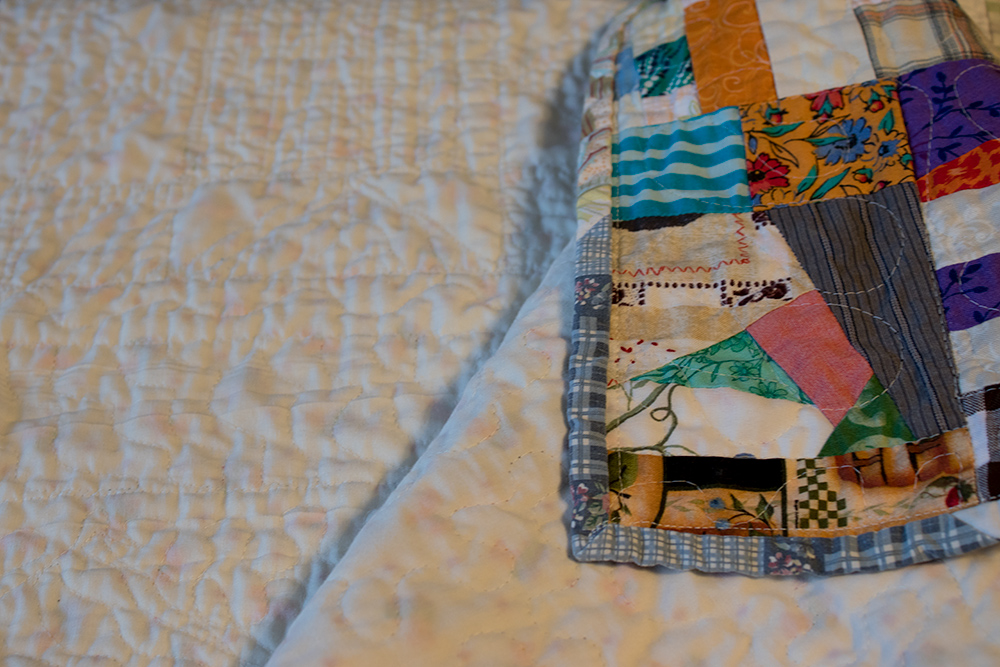 I don't think the dogs care, either.  ;o) I've put the finished quilt in Luna's crate, and I think she likes it well enough!