Waste Not, Want Not

June 23, 2014
I've finished the border for the Ugly-Cute afghan!  (And changed its name to the more positive "Waste Not, Want Not".)  It's taken a while, because apparently crocheting the same thing over and over again, around and around, is, well, boring.  It depends on the pattern, I guess, but the border I chose was extremely repetitive.

I thought I'd try to use up as much as possible of my remaining (but dwindling) stash of Caron Simply Soft.  (All except those skeins set aside for a different afghan-- all shades of blues, grey, and white, if I recall correctly.)  I was aching to slap the "FINISHED" stamp on this project, though, so I stopped well before the yarn ran out.  There'll be more leftover Simply Soft than planned. (Some way to use the rest will come along.)

A few photos of the finished scrap-buster: 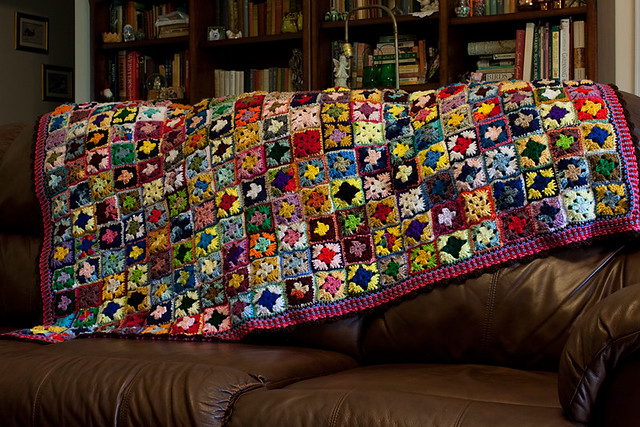 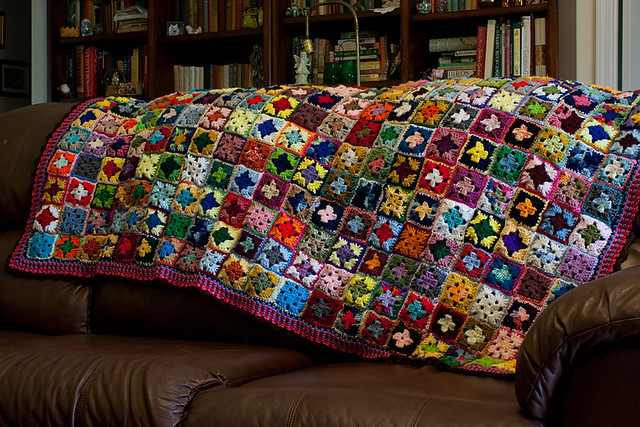 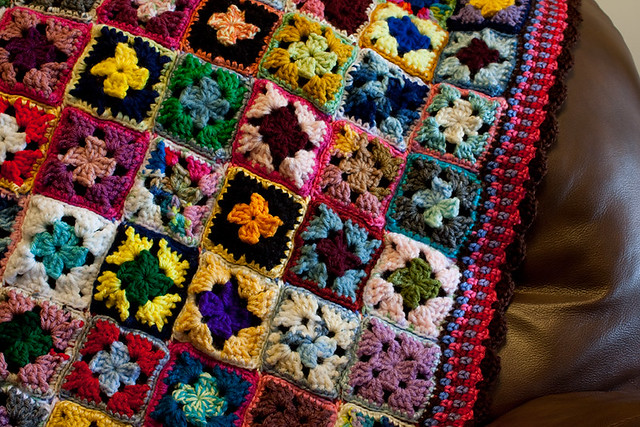 It turned out prettier than I would've thought, when I started it.  (A bit rumply, but...)  I don't think it'll be out on display, like this, but it's perfectly serviceable.  I kind of like the "used every last bit" look-- that "use it up, wear it out" style of thrift.

I'd like to make another "scrappy" granny square afghan, sometime, but if I do, I'll forgo the round of single crochet (last round of the squares in this afghan), use only pieces that are long enough to complete a round (i.e. no "magic knots", no extra ends to weave in), and I'll probably opt for "JAYGO".  (I got sooooo tired of the slip-stitch join!  JAYGO's the way to go.)  I'd likely also make the squares more than two rounds each-- three or four, at least.  Oh, and I'd strive to use only yarn of a (very) similar weight.  (That can be tricky at times, which is why I'm trying to get rid of the Simply Soft-style so-called worsted-weight.)